Okay. I have established that I am writer. Something you may not know about me . . . I am a mom of four boys.

And two of those boys are in a rock band. And you know what? They’re actually good. Like, really good. They’re self-taught musicians with over a decade of experience between them. And they’re not even out of high school yet.

Their band is called Forgotten Faces and they play the kind of music I love–ROCK. Of course my kids would give some genre specific name, but me being old-school, just call it good, hard-rock music.

The band was founded by my two boys: the drummer, Lucas (9th grade), and lead guitarist, Cesar (12th grade) and then  they found Hector for vocals, and Rod to play bass. They started out playing the High schools open mic nights that were held in the library once a month. And they sort of developed a following that way. In just the past few months, they’ve moved beyond that, and started getting invited to play at house parties with bands whose members are much older than my boys, local rock shows with other great bands like Bears Among Men and The Architect, and just this past weekend they played their first out-of-town gig. It took place at the Grand Opening of a Tattoo Shop, in Fresno. They’ve also been invited to play with a band called Your Hero Is A Villain 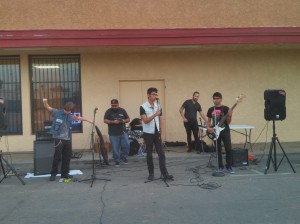 Below is a video snippet of their newest song–which they performed at the grand opening this past Saturday. It doesn’t have lyrics or a title, yet. So all of you have the opportunity to hear what they sound like!

The next video is their song Absence. It’s the first video they ever made. It was part of a school project, and it has a special place in my heart.