Today is the first day of week 12 in the SYNC Summer Reading Program.

. . . and listen to some really GREAT BOOKS!

YA Selection of the week: 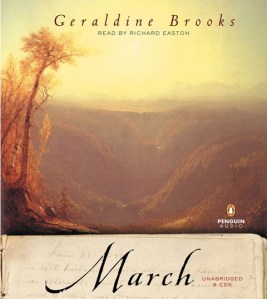 As the North reels under a series of unexpected defeats during the dark first year of the war, one man leaves behind his family to aid the Union cause. His experiences will utterly change his marriage and challenge his most ardently held beliefs. Riveting and elegant as it is meticulously researched, March is an extraordinary novel woven out of the lore of American history. From Louisa May Alcott’s beloved classic Little Women, Geraldine Brooks has taken the character of the absent father, March, who has gone off to war, leaving his wife and daughters to make do in mean times. To evoke him, Brooks turned to the journals and letters of Bronson Alcott, Louisa May’s father—a friend and confidant of Ralph Waldo Emerson and Henry David Thoreau. In her telling, March emerges as an idealistic chaplain in the little known backwaters of a war that will test his faith in himself and in the Union cause as he learns that his side, too, is capable of acts of barbarism and racism. As he recovers from a near mortal illness, he must reassemble his shattered mind and body and find a way to reconnect with a wife and daughters who have no idea of the ordeals he has been through. Spanning the vibrant intellectual world of Concord and the sensuous antebellum South, March adds adult resonance to Alcott’s optimistic children’s tale to portray the moral complexity of war, and a marriage tested by the demands of extreme idealism—and by a dangerous and illicit attraction. A lushly written, wholly original tale steeped in the details of another time, March secures Geraldine Brooks’s place as an internationally renowned author of historical fiction.

Classic Selection of the Week:

by Louisa May Alcott | Read by Kate Reading

Little Women is one of the best loved books of all time. Lovely Meg, talented Jo, frail Beth, spoiled Amy: these are hard lessons of poverty and of growing up in New England during the Civil War. Through their dreams, plays, pranks, letters, illnesses, and courtships, women of all ages have become a part of this remarkable family and have felt the deep sadness when Meg leaves the circle of sisters to be married at the end of Part I. Part II, chronicles Meg’s joys and mishaps as a young wife and mother, Jo’s struggle to become a writer, Beth’s tragedy, and Amy’s artistic pursuits and unexpected romance. Based on Louise May Alcott’s childhood, this lively portrait of nineteenth- century family life possesses a lasting vitality that has endeared it to generations of readers.

Don’t forget, these free audiobooks work with the Overdrive Media Console, an app that most library systems across the United States use to virtually checkout ebooks and audiobooks, so you’ll need to download the free app in advance
Enjoy, Readers.