Book Review Of Between Octobers

Here’s a great review of my first book, Between Octobers, written by the The Sharon of SHARON’S BOOK NOOK Blog and pasted here for your reading pleasure: 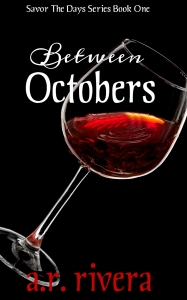 Synopsis: A single decision can change life in an instant.

Grace Zuniga, a yearling widow, is convinced she could never fall in love again. She has surrendered to her quiet life on a quiet street in a world that revolves around her two young sons—until the moment she steps into an elevator.

Evan, also known as Rhys Matthews, is a typical Hollywood playboy. He’s used to women falling all over him, but Grace is different. She makes him believe in love at first sight and in himself. She’s thoughtful, beautiful, and intelligent—the opposite of his usual type and the woman he never knew he always wanted.

It’s an ordinary October day when the two meet in an elevator and embark on a romance that is anything but ordinary.

The following October, Grace is living out a normal day until she suddenly finds herself trapped and struggling to get away from a faceless woman. Terrified, Grace can think of nothing but her motivation—her sons, Evan, all the mistakes she thought she had time to make up for, and a love she will give anything to keep. Stumbling through her bleak circumstances, Grace relives the past year and thinks of all that has happened between Octobers.

Between Octobers is set over a period of one year and is filled with plenty of drama, love and tumultuous emotions.

This story is nicely written, moves at a steady pace, projecting very strong emotions that pull the readers emotions in opposite directions and has very likeable characters in Grace and Evan along with villains to loathe. The story is told in the first person via Grace’s point of view and towards the end switches to Evan’s. I enjoyed this part and found that it gave the reader a good view of the story from both sides of the coin.

Our main character Grace is a widow after losing her husband in a car accident a year earlier. She is a mother of two boys and is a very kind-hearted caring person who is trying to piece her life back together for her family. Then we have Evan, he’s a famous actor and is having issues of his own, that are not fully disclosed until over half way through the book. Along with this he is having to deal with his lack of privacy and annoying paparazzi. Aside from this he’s a very sweet guy and cares very deeply for Grace.

The secondary characters also provide the reader with a good mix of personalities. From the innocence of children, to the nasty mother-in-law, the protective sister-in-law/best friend and a loyal best mate.

The romance side of this book is sweet, and there are no graphic love scenes. The relationship between Grace and Evan does develop fast, but it still feels quite realistic and not the instant-love you can come to expect with some books in this genre.

As for the ending of this book, I did not find it predictable and I liked that especially. Even though, it’s not a particularly joyous end we are given an earth shattering climax.

If you enjoy stories that pull at your heartstrings and keep you guessing then, you may enjoy this book.