At approximately 11:30 p.m., I was lying in bed. It had been a long day, one of the toughest of my life. And it was about to get worse.

In just one hour, I would be back inside that damn hospital room, looking at him, but he would be gone. I would be pulling back the carefully tucked blankets to take pictures of his hands because I was afraid of forgetting what they looked like. I would be putting my head on his stilled chest and thinking, “this is the first man that ever loved me.”

But around 11:30 p.m., I was still laying in my own bed beside my snoring husband who had been doing all he could to comfort me for the past two weeks. My dad had lung cancer, but that diagnosis would be post-mortem. Four days after I would take those last photos and mourn all of the moments wasted when I could have taken pictures with my dad but didn’t because pictures always make my fat look fat. So stupid. 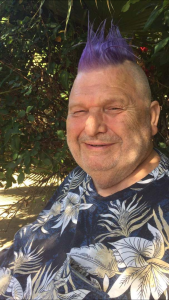 This was my dad. One of my boys took this picture of him last spring, in our backyard. He had just sold his house in Arizona and was going to move to Texas. But before he left, he came to central California because he wanted to take his grandsons to Disneyland. He arrived with that purple mohawk. At 71-years-old, my dad was still a kid at heart. He’d wanted a mohawk for a while. When he finally got one, he loved it.

Since January 18th, I’ve had the clarity of hindsight. The curse of clarity.

On the morning of the 17th, he seemed happy. Anxious, even. Dad was excited because his favorite younger sister was coming up from LA. All morning, every time there was a voice he didn’t recognize or a movement in the hallway outside his door, he’d open his eyes (the meds made him sleepy) and ask “Is she here yet?”

Finally, just after 2 in the afternoon, my Aunt arrived. My Dad was energized. He hugged her. We all hugged her.  Then me, my nephew, my kids, and husband- we all left for a few hours to give them time together.

Three hours later, I got back to his room and found out that Dad had been in a downward spiral. My Aunt was there, sitting beside his bed, holding his hand. She talked to him about how important he was to her. How much she loved him. All those things you want the people you love to know. We all sort of followed her lead, then.

Around 8 p.m., my dad said, “Put me in coma. I don’t want to feel this anymore.” So the Nurse ordered a morphine drip. Comfort Care.

By 9 o’clock that night, we’d called for the hospitals’ Chaplain. It’s like he was only waiting to see his sister. After she left, he just let go.

Later, the nurse told me the Doctor was on the phone. He said, “What’s going on over there?  I just saw him this afternoon.”

“He’s gotten worse, much worse… He wanted the priest.”

“I looked at his chest x-ray. He does have some minor congestion, so I ordered a decongestant. Do you want me to put him on comfort care?”

After some back and forth about what that meant, I agreed with my Dad. “It’s what he wants, so…”

“I’ll order the morphine drip, but anytime you want him to wake up, all we have to do is turn it off. It’s very simple. We’ll start a low dose and tomorrow morning, first thing, I will come by to check on him because he will still be here.”

That last sentence … it gave me hope before I recognized I’d lost it. That last sentence nullified the alarm bells blaring at every turn. I couldn’t make sense of them, anyway. Over the past two weeks, as I had been living this crisis alongside my father, helping make his requests and watching him receive his last rites, I still could not conceive of a world without him in it. I don’t think any of us could.

So we left the hospital.

I left. The hospital. 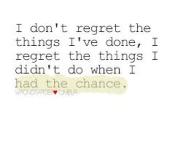 Just before the chaos erupted that night, near 11:30, I finally laid down and closed my eyes. Almost immediately, I began drifting off.

In my minds’ eye, I saw myself, sitting on my bed. And just barely within my field of vision, there was my father. He was younger and thinner. He had dark-brown hair and a beard again, just like when I was a teenager. He was sort of peeking at me through a doorway, rather than standing inside the room.

Leaving him alone in the hospital that night is one of my biggest regrets. I constantly ask myself “why did I leave?” In truth, my being there was probably more for me than for him. I don’t honestly think that my father would have wanted me there when he fell into the deepest of sleep. My whole life, he always tried to protect me. He never wanted me to worry about anything. He was a firm believer that worry is useless. He’d always say, “things always work out one way or another.”

When I saw him in my minds’ eye, during his last moments on earth, he was there to give me a message: “I’m okay.”

I’m okay.  I’m sad and hurting, but I am okay. Even though the world has gotten so crazy it’s barely recognizable in the few months since he passed. I’m still okay. And I’m pretty sure that no matter how much I worry about it, life will eventually return to normal, and everything will work out one way or another.